A native New Yorker, Tia Maggio, was formally trained in graphic design and advertising at Pratt Institute, she went on to the University of Massachusetts, Amherst, to study fine art and art history. Even before then, this pastel artist was immersed in the world of art. Her mother, Patricia, attended the Rhode Island School of design and was a painter and her father, Joseph, “a weekend watercolorist” had his own interior design firm in New York and London. After college, Tia was the director of sales at her father’s firm, during that time she opened and managed their corporate office in London. Later she partnered with her friend Sonja, another Pratt graduate, to form Sontina Graphic Design, where their mainstay was designing company logos. When children came along, Tia left the corporate world and turned to watercolors and from there to pastels. After advertising she enjoyed the loosenes—freedom- of fine art. She admires German Expressionist Emil Nolde, and artist Wolf Kahn. She loves the untamed wildness of Nolde and in turn the ethereal calm of Wolf Kahn. Inspired, too, by painter Charles Burchfield, she is excited by his fearless vision. Tia pulls her inspiration from nature as “it is the only thing that really makes sense to me—wild sunsets, storms, brambles and branches.” Once described as a tonalist, she describes herself as a nature based expressionist. Her website is tiamaggio.com. 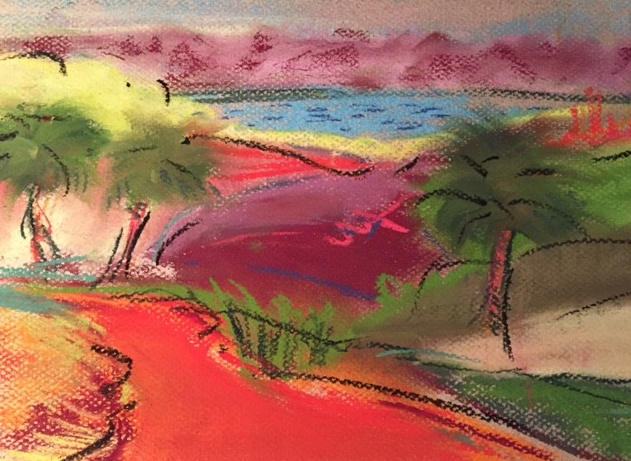